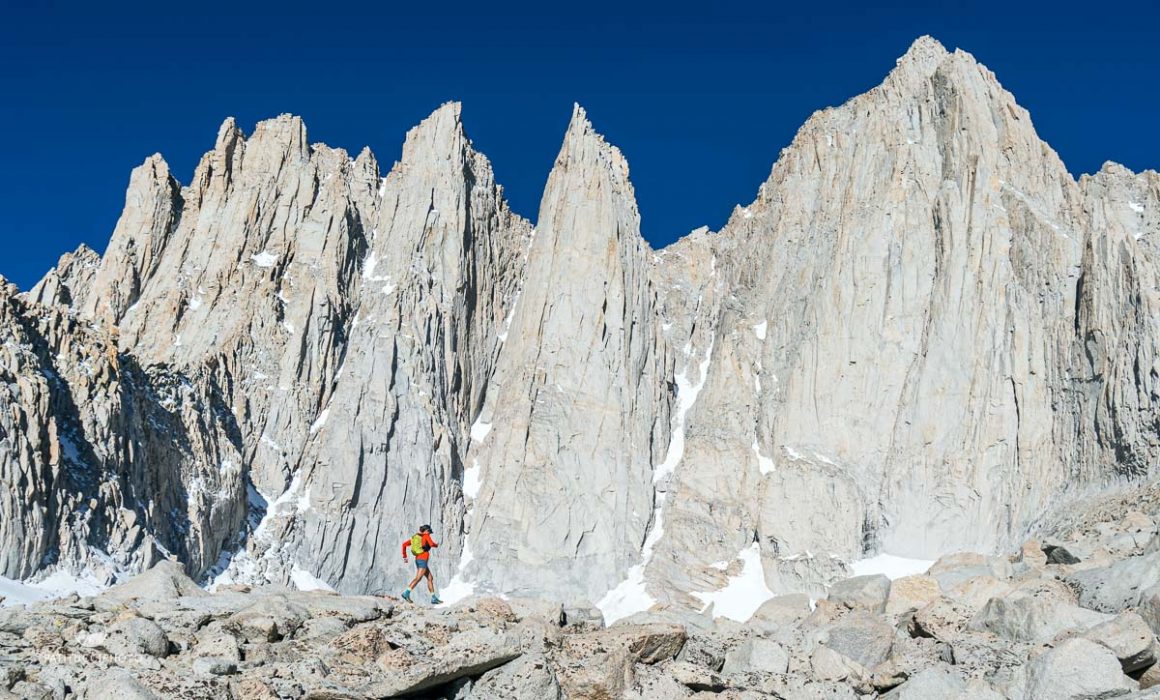 I think we can all admit to going on runs that have little to do with running.

The routes show up in our Strava feeds as a run, but a quick glance at the time and pace reveals that something very different went down … or up, or along a slow moving ridge.

And so it went the other day at 3:30am when we launched out to run Mt. Russell, the fog of sleep still thick.

I’ve been up the North Fork of Lone Pine Creek to Iceberg Lake enough times to know full well that it’s hardly a trail to “trail run.” It’s abundantly rocky, steep, and more often than not just the kind of trail where you want to walk. Nevertheless, there we were a few days ago in running shoes, short shorts, running vests, and headlamps. The plan was to do some link up of Mt. Carillion and Russell, the how hadn’t been determined.

At Upper Boyscout Lake, I knew there were options to get up Carillion that involved lots of sand. I wasn’t exactly sure where to go as multiple faint trails headed towards the peak, and we weren’t stoked on the sandy climb. A quick consult of the map was in order. Only we didn’t bring one. Both our phones had been left in the car, by accident, or possibly replaced by sandwich weight in the pack knowing it would be a long day.

My first reaction was annoyance, “How will we find the way?”

I’d been up to the Whitney group to climb, run or ski about 20 times and the highest tech piece of phone I ever had back in the day was a flip phone. Now, the fact that I had been concerned by a lack of phone nagged me.

It was interesting to take a moment to consider the route options using my knowledge of the area and not just follow a track. Runners don’t always want the same ingredients as hikers or climbers, we prefer a route through terrain that makes sense for how we move.

We made a new strategy to continue on solid ground up to Iceberg Lake. From the Whitney-Russell Pass, we ran over to the base of Russell, huffed and puffed our way up the scree and talus via the steep, but short, standard descent route. From the summit of Russell, we descended the East Ridge (class 3) to the Russell-Carillion Pass, with a short up to tag Carillion. From there, we knew we’d made the right call as troughs of deep footprints dropped away to Upper Boyscout Lake, far below. We’d get to enjoy those sandy troughs with gravity on our side.

Minutes after, we landed at Upper Boyscout where we dumped piles of grit from our shoes before rejoining the North Fork of Lone Pine Creek Trail. The circle closed, we trotted back to the Whitney Portal. Ten hours later and with only a twelve-miler in our legs, we’d done the perfect trail run – two summit stops, a ridge traverse, an easy scramble, sunning on rocks, and admittedly even some running.

For higher percentage running trails, stay tuned for our coming guidebook Sierra Trail Runs : A Guide to the Eastside, due out later in 2022.